I’m currently re-reading ‘The Cubist Epoch’ by Douglas Cooper (Phaidon) and I can’t stop thinking of the following passage relating to Picasso’s painting, ‘Dance with Veils‘:

[which] reflects yet another of Picasso’s sculptural preoccupations, for it seems to bear out his expressed hope that, if he had succeeded in truly representing his subject, one should be able ‘to cut up’ his canvas and having reassembled it ‘according to the color indications … find oneself confronted with a sculpture.

Whilst it’s not a particular favourite, this painting (referred to as ‘Nude with Draperies’ by Cooper) is one of several produced during 1907-8 which helped Picasso ‘advance progressively towards the creation of Cubism’.

I love the concept of a 2D sculpture, as it resonates so well with my interest in contrasting ‘flatness’ and ‘form’, so this new painting is another attempt at exploring methods of reproducing it.

During it’s production, I was also trying to keep in mind lessons learned during the recent collage workshop I attended and, especially, the bold use of colour made by Ernst Ludwig Kirchner in his ‘Self Portrait with Model‘ that I used as reference.

For interest’s sake, below is the original life drawing on which the painting is based. It was painted back in February of this year so, given that I painted over it the day after and have been re-working it on and off since then, it’s come as quite a shock to me to see how much the finished piece has changed from the original.

Without being able to refer to the original (and having forgotten until now that I had the photo below), I felt I had a very strong recollection of the pose. I was even considering calling the painting ‘The Yellow Dress’, as that was the most vivid part of my memory, but I now see how faulty that memory was.

I guess the finished piece must be an amalgam of fragments of remembered poses from different sessions, or of half remembered snapshots of the evolutionary/developmental stages of the piece itself, rather than the actual pose. Fragmentalism? 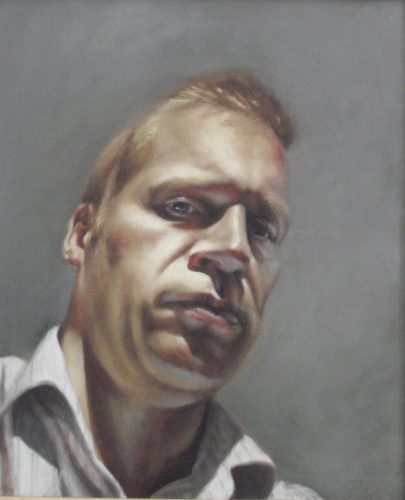