Yay! Someone kindly bought my painting ‘The Inland Sea Pontrhydybont New Year’s Day 2017’ from the Island Art Group Exhibition in Beaumaris last Saturday (for which ‘Thank you!’) so I hope this post isn’t a bad idea, but I thought it might be interesting to show the development process the painting went through…

Here’s a photo from one of my visits there just so you can get a feel for it if you haven’t seen it.

I’ve always loved that particular view of the Island Sea when the mill and Holyhead Mountain are picked out against the sky by the sun. If the tide is right, a variety of water birds (e.g. herons, little egrets, various ducks and waders) make the most of the exposed banks in the middle of the Inland Sea, and standing there listening to their calls and painting is like trying to paint a little piece of heaven, so I’ve been returning to this spot on and off for ages.

I painted the following version ‘en plein air’ (which, I believe, is French for painting outdoors whilst getting sunburned and receiving funny looks from passersby). As you can see from the photo above, a fair bit of artistic license has been used to try and fit the key elements into the composition.

At the time, I was really taken by how the water seemed to be as smooth as glass in certain parts and yet still have a slight sense of movement from the gentle tide in others, providing interest and texture as well as changes in reflections and colours in the water, depending on where and when I was looking.

I then worked on recreating the painting on canvas over a number of weekends in my ‘studio’ (spare bedroom) to try and encapsulate how I felt about it, as evidenced by the following gif (made with gifmaker.me).

On standing in the studio recalling the experience of being ‘on location’ painting it, the main things I remembered were the bright sunlight making the fragmented reflections look like a stained glass window, and the contradictory sense of stillness and movement, so I was very keen to try and replicate those in the finished painting.

This fragmented approach also brought to mind a quote by Maurice Dennis (BrainyQuote.com):

Remember that a painting – before it is a battle horse, a nude model, or some anecdote – is essentially a flat surface covered with colours assembled in a certain order.

As someone who is particularly interested in describing clearly delineated physical forms, volumes and planes in finite spaces, I find it an especially difficult challenge working out how to represent the enormous empty spaces and distances involved in landscapes, so this stained glass window approach using flattened colour shapes provided a way for me to try and address that.

I just hope that one of the previous iterations doesn’t appear to be better than the finished version!

(For info, for those that haven’t been to Pontrhydybont, just out of the picture to the left is ‘Four Mile Bridge’ bridge itself which is responsible for the cast shadow across the water and land, brought further into the picture for compositional reasons…) 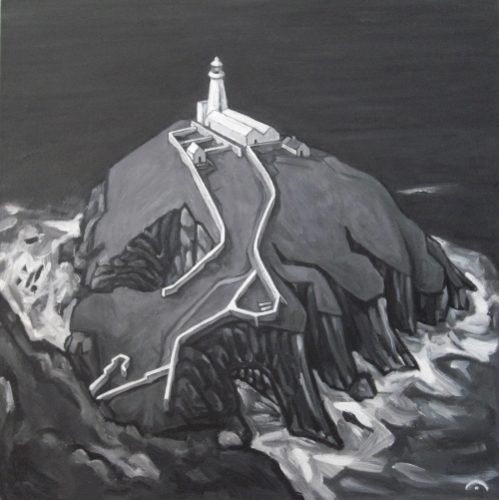 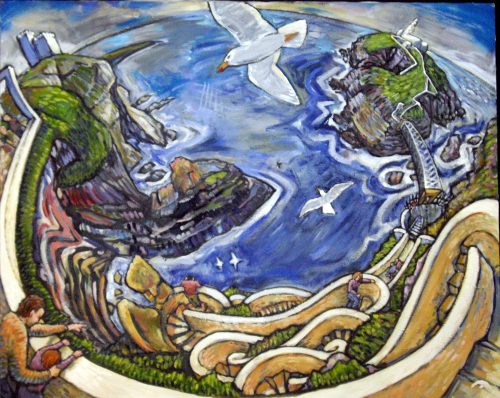